It Begins With the Name

As a legendary vineyard and winery, Carmody McKnight Estate, working in unison with the Miss America Foundation, is passionately devoted to women’s empowerment and parity through expanding education opportunities and career resourcing.  For starters, Carmody McKnight pledges every barrel, every bottle and the benefit of unique creative energy to the economic and social advancement of all women.

This commitment has been sorely lagging throughout this country’s history as women were second class citizens and always at the bottom of the gender gap. It ultimately took such emancipating efforts just to guarantee women the right to vote. Gender disparity looms consistently over us and through our entire history and may be more stubbornly persistent now as reported by the World Economic Forum.  The report had previously forecast that gender parity was a century away. But the effect of the pandemic has now added roughly 36 years to its calculation, effectively the span of another generation.

Carmody McKnight itself represents women’s true equality.  It was named for Gareth CARMODY and Marian MCKNIGHT from the very beginning 40 years ago! In the wine business gender gap is demonstrated simply in a name.  We know of no other winery named after husband and wife, especially when that is the starting point of the endeavor. 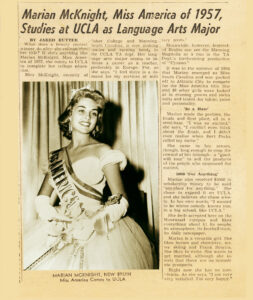 It was Miss America’s generously rewarding scholarship (and the spell of the West Coast) that beckoned Marian McKnight to UCLA where she and Gareth Carmody came across each other as students during the production of the play, Volpone.

If Marian had finished in second place as Miss South Carolina or, indeed, runner up in Miss America, Gary and Marian never would have  met! There would never have been a CARMODY MCKNIGHT.

The Miss America Foundation (MAF) is a 501(c)(3) nonprofit organization that serves as the scholarship arm that processes scholarships for recipients across the country. MAF proudly offers academic and community-based scholarships for undergraduate and graduate studies, as well as endowed scholarships for those young women attending medical school, working in special areas for military service awareness and in the performing arts.