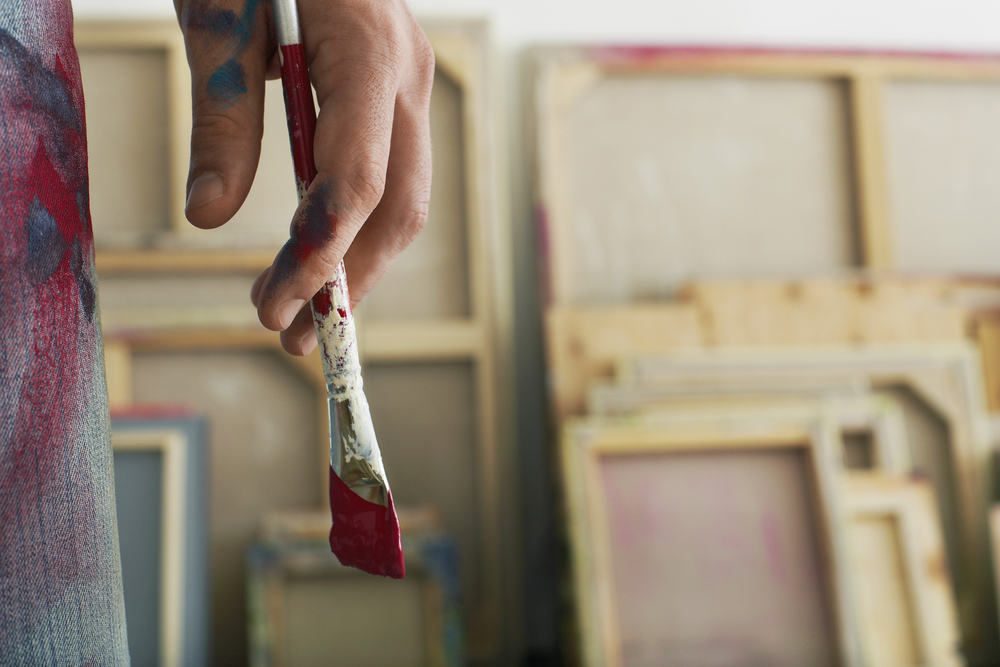 Man of terroir, of the earth, the wine, the art.

Carmody McKnight vineyards, adjoining the Big Sur coastline but far above it, lie within the world’s premium wine growing area… a region of wondrous beauty of landscape, the essence of wine, and the tectonic art of the proprietor-pioneer, Gary Conway.

When Gary realized his vineyard art studio was built on the ancient magma within a volcano’s crater, there soon was a profound change in how he observed and thought about the world around him and the earth beneath… in all its multi-hued magnificence and mystery.  Yes, a profound change and creative rebirth.

Deep influences from Fauvism to Expressionism and beyond waned for him as his abstract paintings began to reflect the color explosion and dynamics of irrepressible nature.  Gary then was compelled to revitalize his earlier landscape days and create a series of images that helped to pictorialize the aesthetics and awe of volcanic transformations.

Most all his paintings became indicative of ancient cataclysmic events that can only be imagined in their overpowering forces. He further explains that the universe in the making is fantasized in his art far beyond our visual world and in a timeless tumult of eternal color.

Gary is a Renaissance man for our time (in fact he was awarded Renaissance Man of the Year at the Paso Robles Film Festival).  Born Gareth Monello Carmody, he was the youngest artist to win a major prize at the LA County Art Exhibition, before age fifteen. Even prior to high school (L.A. High), Gary was awarded full scholarships to three of the most prestigious art schools in the country and a special private scholarship with the L.A. County Museum.

Graduating from UCLA, he not only dedicated himself to fine art as a life-long pursuit, but also continued as an accomplished violinist who performed at the Hollywood Bowl, as well as an architect and builder whose work has been featured in Design West.  His musicianship included a contract as a singer and guitar player with the reigning music company at that time – Liberty Records.

His remarkable talents expanded to include TV and film star.  It was in television where he became an instant worldwide celebrity, first with a starring role in the TV series Burke’s Law.  While on this classic series he had the rare opportunity to work and often create friendships with a grand array of legendary stars of the silver screen, from Mary Astor, to Bette Davis, to Gloria Swanson, to ZaZu Pitts.

Gary followed the iconic series Burke’s Law with Land of the Giants.  The world TV audience confirms Gary’s inimitable international cultural appeal as his iconic TV series Land of the Giants aired in more TV stations worldwide than any in history.   Today, many years after its initial release, there are highly active clubs and societies around the world devoted to Gary and the series on a full-time basis. “Giants” is a pop-icon with social themes relevant to our day, underscored by multi-international websites, Facebook pages, and a fandom that does not wane.

Besides starring in series and a multitude of episodic television shows and major TV pilots, he starred in many motion pictures. He had leading roles and even production credits in The Farmer, Black Gunn, Once Is Not Enough, to name a few.

Gary wrote and directed the film Woman’s Story, heralded as: “an extraordinary film… a stunning filmmaking achievement… with such artistry that it becomes a genuine work of art.  The look of the film is much like a great painting.”  For Gary, the film is indeed an extension of his painting as well as articulating a vital social message.

Gary became noted as a screenwriter and wrote the scripts for such popular films as Over the Top, as well as the highly successful American Ninja film series.  He also originated film scripts for such stars as Laurence Harvey, Catherine Dueneve and Eddie Murphy.

While active in television and motion pictures, centered mostly in Hollywood, Gary discovered and fell in love with a broken-down ranch on 320 acres in the Central Coast of California.  Gary first beheld the idyllic beauty of the area aboard a helicopter moments before it crashed.  Emerging from the wreckage, Gary exclaimed to the still stunned real estate broker, I’m going to buy this place!  This is the stuff of legends; and, indeed, in the ensuing years the vineyard and its supersoils and textbook microclimates are fast becoming legendary by way of Carmody McKnight Estate Wines.

Adding further to the legend of the land, the vineyard was chosen as the most endowed in the world and the subject of an extraordinary joint effort between John Deere, Motorola, Earth Information Technologies, and Cal Poly University with support from the State of California due to the rarity of the terrain derived from calcareous shale, limestone, black limestone, igneous (volcanic) rocks as well as calcium montmorillonite — “the wonder soil,” and a “super wonder soil” that exists nowhere else!  No other vineyard or agricultural property in the world possesses all of these remarkable attributes and in such abundance.

As a result, three of Carmody McKnight wines, in combination to create the Meritage, won against all California wines in the most prestigious of competitions, the California State Fair Wine Competition.  The winery itself was voted number one and six other categories.  Gary’s label for the Meritage also won a double gold and “best of show” at the Orange County Fair Label Competition.  It was the first time that a wine and the label on the bottle won the highest of all awards.  Gary’s labels have earned innumerous major awards and international acclaim.

Not long ago, the Chinese invited Gary to address Beijing University at their most significant event of the year accompanied by a life-story film presentation the Chinese created.  The 300 attendees were corporate chairmen, presidents, CEO’s, executives, major business leaders from all over China.  There was a running film accompaniment with several videos of Gary Conway’s life and work, as well as Marian Conway (they revered Marian and admired — and knew about — her great scholastic achievements). A special video was also screened relating the story of the astonishing vineyard and sustainable winery.

Gary and Marian’s appearances in the following days ranged from a momentous press conference with the leading wine magazines, world media and ambassador to an epochal gathering of Chinese celebrated artists in an historic exchange of ideas and aspirations.

The hosts arranged for a collection of Gary’s original paintings to be shipped to China for exhibit. The sponsors framed all of them in China, and each one was displayed on separate easels in a multitude of events. The exhibit continues throughout China.  The Chinese revealed a deep appreciation for the art.  Gary was also invited as the first American to a conference featuring some of China’s most prominent, world class artists, photographers, and sculptors.

Before the actual press conference in a separate set of rooms Gary and Marian spoke directly to reporters from China’s major press. This significant event was held in a cluster of magnificent buildings of antiquity — with the U.S Ambassador present and other distinguished members of the press — then back to yet another beautiful set of rooms to speak to reporters for nearly two more hours.    The most prominent wine magazines in China (Wine in China and Wine Magazine) and beyond (La Revue du vin de France – China) were present as well as a formidable group of other major traditional press.

The hosts created original copies of Gary’s TV series Land of the Giants which had special presentations and distribution.  As in China, the series was the number one American show in most countries   They brought in Gary’s books, as well as Magnums and Jeroboams with original labels on canvas… the list goes on and on.

Gary was immensely impressed with the Chinese culture.  He explains that the Chinese are genuinely interested in the actual people creating the art — on canvas, on film, on the page… and crafting the wine… their character, their humanity… almost more than anything else.  They understand the process of true creation, especially with wine and deeply respect the genuine creator.  They certainly appreciate and want to learn everything they can about the genesis of the wine — the vineyard from where it derives.

Among so many knowledge-seeking requests they brought to China six different glass containers (that were previously prepared by the Cal Poly University) which revealed and described in their complexity all of the soils and the geological layers that characterize the remarkable Carmody McKnight vineyard. Gary shares the fact that “The Chinese made it a point to know everything about us and understood our intrinsic philosophy and aspirations.”

The story of Gary’s odyssey with the land, Art of the Vineyard, has been published by the prestigious Journey Editions of the Charles E. Tuttle Company.  Besides authoring Art of the Vineyard, the book includes over a hundred of Gary’s brilliant landscapes which are indicative of his outstanding reputation as an artist.  Art of the Vineyard has received overwhelming praise from all quarters of the country.  Connie Martinson on her television show Let’s Talk Books, said, “Gary ‘s Art of the Vineyard would be a wonderful book on its own let alone an extraordinary book of art .”  In a review in New Times and on PBS, his work was described as “magnificent, exhilarating, vibrating, extraordinary.”  In the review in Booklist, perhaps the most significant in the publishing industry, his book and its art was referred to as “vivid, nearly neon color palette…the images demonstrate the human capacity to love, desire, create, and persevere…a rendering of Conway’s passion.”  Gary is working on a follow up book that begins at the conclusion of Art of the Vineyard in which Gary and Marian take a sip of their first wine created at the vineyard. 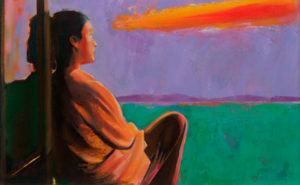 Gary painted forty-five art works in relation to the film and women’s themes, most were employed in the art direction of the film.

Gary wrote and directed the film Woman’s Story. Woman’s Story is heralded as: an extraordinary film… a stunning filmmaking achievement… with such artistry that it becomes a genuine work of art.  The look of the film is much like a great painting.  For Gary, the film is indeed an extension of his painting as well as articulating a vital social message.

Woman’s Story had a unique premiere release around the country.  The film not only reached theatrical audiences usually unable to see such artistic films, but also raised much-needed funds and awareness for major museums, schools, universities, and other organizations dedicated to the community’s welfare.  The film and the exciting premiere events, special cuisine and wine dinners, art and wine auctions following the screenings inspired the leaders of the communities.  They heralded the premiere events and film as “amazing,” “a shining moment,” “tremendous,” “awesome,”“fantastic.”

Gary is developing a television series both network and online which will encompass his vast experience as a Jeffersonian farmer and winemaker as well as an international series, The Studio.  Likewise, he is creating a significant documentary encompassing his unique experiences on the vineyard: Heard it through the Grapevine. He is also working on his next motion picture project to be filmed on the Central Coast, tentative title: The Last Dinner… and you thought supper was tense!  He has completed a play for a major Broadway producer based on his original film script Over the Top.