Land of the Giants

We all live in the land of the giants!

Gary Conway starred in Land of the Giants. Giants holds the record as the most popular TV series on a worldwide basis, playing in more stations internationally than any other.  The series follows a crew of passengers aboard a sub-orbital spaceship which encounters a space storm and winds up on a planet where everything is twelve times the size of its counterpart on Earth.

There are many factors responsible for its success.  For one, the famed Irwin Allen was a groundbreaking producer who ruled science fiction on the small screen. The big-time TV producer is responsible for beloved series like Voyage to the Bottom of the Sea, The Time Tunnel and Lost in Space.

Giants was the most expensive show on TV.  Each episode had a budget of $250,000, a record for the time.  Most of that money went into the pioneering special effects.  This visual marvel developed techniques of matte painting and optical effects and other techniques making later productions like Star Wars possible.

The eminent John Williams composed the theme music. Williams actually composed two different main themes for the show, one for each season, and also scored the pilot episode.

The record of popularity throughout the world that Land of the Giants created will probably never be seen again on TV for a variety of reasons.  That success had much to do with the “Giants” metaphor and symbolism with its profound social resonance even back to the influential classic novel Gulliver’s Travels. Gulliver’s Travels, a satirical work by Anglo-Irish author Jonathan Swift, was published anonymously in 1726.  A keystone of English literature, it was one of the books that gave birth to the novel form.  Gulliver’s Travels combines adventure with savage satire, mocking customs and politics of the day.

Land of the Giants adapts the sense of those themes but goes even further into the evolving nature of our super state, everywhere and ever growing.  Like the little people in Giants most of us are forced to simply standby and contend with our shrinking humanity and resources as the wealthiest 3 billionaires in the U.S. – Jeff Bezos, Bill Gates and Warren Buffett — now have as much wealth as the bottom half (the littlest people) of the U.S. population combined!  That’s big! 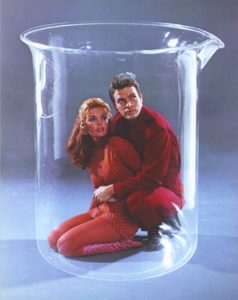 Trapped by the Giants… but no more!

But big need not be bad.  Captain Steve Burton told us that.  As a society we have all crashed in this land where big feeds us, sets the rules, and cures us or not with big pharma and unsure insurance megacorps.    Giants was particularly successful in the many countries that were dominated by the Soviet regime where the citizenry saw themselves as the little people facing a giant empire that smothered their intrinsic independence.

Our social framework, more and more, can be viewed through the lens of big and little.  Big business and little.  Small and local; big and international.  Small community; giant corporate.  Big and rich; small and struggling.

We live in a new Land of the Giants where the metaphor is more apt and concerning than ever.  The Giants run much of our lives and their hold increases each day especially in the New Land of the Giants.  And the troubling part… most of us don’t even realize it.  Because they try to look little like us!

Fans have asked endlessly… will the little people ever escape and come back to earth?  To people their size? The answer was no.  That may be the answer today.  You can ask the same question about giant wine… big factory industrialized wine making.  The answer may also be no.  So now more than ever we need an alternative.