In the moments before the helicopter crashed I was mesmerized ahigh by the undulating wooded hills reaching into the almighty Santa Lucias where the light was blazing and spilling out wide and beyond.  A painting in light as in a dream, but I suddenly awakened by a sickening explosion of sound and a spinning helicopter.  I will always remember those terrifying moments but to this day I find myself still spellbound by the enshrouding day’s end sunlight as virgin and pristine as light from any heaven. 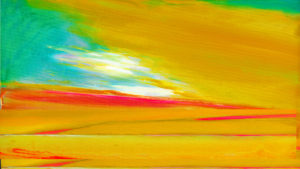 Take a drive in the late afternoon through Paso West and share in the luxuriant luminosity.  When I began painting the undulating landscape of the vine loving foothills I noted the intensity of color was similarly immaculate.  Pure color directly from the artist’s tube.  I observed that the hues of the sky’s horizon were as vivid and distinct as the crown of the sky above me.  I had never seen that phenomenon much and certainly not every day as you discover in Paso West.

One afternoon, sitting at the dining room table I commented to Professor Tom Rice how the horizon around us never seems to blur or assume a grayness which is characteristic in almost all photographs and paintings.  He pointed out that the science investigations over a period of time found almost no humidity in our immediate area.  Being so close to the ocean that fact was unique.   The professor underscored that most vine diseases are caused by fungal pathogens which thrive under high humidity more and more prevalent in the once premium vine growing regions.  With our nearly non-existent humidity and more days of sun than any land in California no wonder fungicides, pernicious and carcinogenic, have ever been applied in the vineyard’s history.

Carmody McKnight vineyard and the momentous research and studies, much directed by Professor Rice, must lead by viticultural example the proper evaluation of new possible premium viticultural land across the continents as global warming transforms topography and temperature.  This endowed land born from the Santa Lucias rising out of the Pacific will enlighten California vine growers and wine makers of where they may have to escape since so much of the state has lost its precious Mediterranean climate.  The studies that began on this land of light address that burning question and the vital knowledge should continue to be pursued and deeply understood.  The vineyard, one of the very few on earth that escaped the devastating plague Phylloxera, is also an example of the agronomic factors that protected the vineyard and deserves special study and emulation.